From concept to production

James Tye, Executive Director and Founder of Clean Lakes Alliance, originally brought me on to the team for website and cloud server consulting. At the time, I was running a cloud server and website/app design firm called VAALID.

His organization was in need of secure, lightning fast, and reliable hosting as their current provider had a lot of issues with performance and uptime. My consulting led to less than 1 second page load times and an SSL secured NGINX cloud server that allowed for dependable payment processing.

As a result, James and the team hired me on in addition to my consulting. My role was leading the design and development of their LakeForecast application. LakeForecast is a web app that allows citizens of Wisconsin to view lake water conditions before going to a beach.

The lakes that surrounded Madison, Lake Mendota, Lake Monona, were nearly endangered due to years of water pollution: salt runoff, phosphorus from fallen leaves, and toxic blue green algae. The combination of toxicity made it unsafe for citizens to use the lakes and the federal government was on the verge of stepping in — cutting off access to the lakes. Clean Lakes Alliance needed to stop this from happening — save our lakes they say.

LakeForecast helps citizens identify whether a beach is open or closed, determine water quality and clarity, learn about the beach, and even see how busy the beach was at the moment. In addition, the application created awareness around the state of the lakes. Awareness throughout the community, through the news, and upwards to the government.

When I joined the team it was clear that stakeholders from Clean Lakes Alliance, Spectrum Brands, MIOsoft (development partner), and a design consultant team were not aligned. The project had been spinning for over a year and the project budget was quickly being consumed.

With time not being on our side, I created goals to ensure the project was a success by launch date. 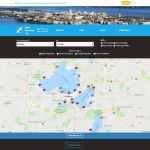 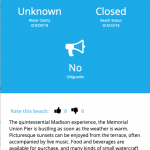 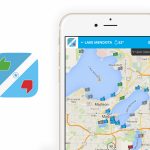 Gaining alignment and agreement was a battle. The partners for original design had not gained alignment on what was expected for MVP which resulted in tension between Clean Lakes Alliance and the development partner MIOsoft. I brought everyone together for a difficult conversation and it was determined that under my leadership, the CLA designers would be responsible for the user experience and visual design of LakeForecast, while MIOsoft would retain development responsibility. Letting go the design consultants was a difficult decision to make, however, it was the right decision at the time. We relieved tension and saved our budget from further irresponsible consumption.

Jordan Barrette, COO of MIOsoft, and I quickly become close partners in the creation of Lake Forecast. He introduced me to the development team and I learned their pain points, desires, and how they thought we could better work together. I did the same of him and his team at Clean Lakes Alliance. Our newly founded close relationship helped us design and develop faster.

The key user group for even making LakeForecast possible are the members of the Citizen Water Quality Monitoring program. Volunteers collect water samples from the shore in order to gain water quality data at various sampling sites around the lakes. The data informs the application on problem areas, and assist researching in developing predictive models associated to blue-green algae formation and movement (CLA.org). The samples provide real-time data to the application after being analyzed by the state’s environmental department.

With all of that said, we needed to ensure that our volunteers could easily collect and add their documentation to the application. Without accurate data we would be disappointing our community and sending ill data to researchers.

How did members could easily collect and add data?

First, I aligned with the lake science team at Clean Lakes Alliance. I asked an abundance of questions along the lines of:

Next, I sketched out an input form and asked the science team to create a short how-to training guide for members. Some fields, like water quality, would require sample images from CLA because water quality can be subjective or difficult to determine. Once the science team agreed on the form, we reviewed the training guide. To gage the learnability of the guide I asked designers to read it as well. If we all understood the guide, then it was ready to be tested with members. Because I have a background in biology, and studied pre-med for two years, I felt that my analysis alone would be mudded.

Following the alignment, the designers and myself would take turns going down to the lake to take samples, input data, and deliver samples to the state department. This was a lot of fun! After we memorized the process we went out to train and observe members who lived on the lakes. These members were great candidates because they were at a retired age, would give us sound data on usability and learnability, and were easily available to meet.

As a result, there were a few tweaks to the scientific language, and input form. The language at times was hard to understand and the input fields were too small to click into for older members. We knew this from observation and the number of phone calls we received.

Originally, files were being handed off to development without documentation. Usability wasn’t considered and there was no clear system in place. While I didn’t have a lot of time to invest in the visuals, it was extremely important to James (Executive Director) that the site was usable and appealing. I found a tool called UXPin.com and utilized it’s user friendly interface to design. This tool was extremely useful to the development team as it provided specs and structure.

LakeForecast met the launch goal, was featured on the news, and is still operating after all of these years. The design has been long-living, and the user experience has been spot on. This is one of my absolute favorite projects I have ever worked on because it helped me realize that design can be used for good, bring communities and governments together, and how to work well with partners outside and within an organization. The relationships I’ve built during my years at CLA are still with me today. Best of all, the Yahara Lakes water quality has been improving every year since, and this brings me joy.